Irv Adler, the Temple’s Treasurer, traveled to Vienna recently to place a Stone of Remembrance in front of the home where his grandmother Clara Bader Nichtern lived before she was killed by the Nazis. Through extensive research that he continues today, Irv learned that his grandmother was murdered in June 1942 at the Maly Trostinets death camp outside of Minsk. We’re sharing the remarks he made during the commemoration on May 18, 2014. Find more in the August Bulletin.

I was born in 1943 and grew up with my family and extended family in the upper west side of New York City, which – based on what I understand today – was sort of a Vienna transplanted. I never heard the word “Holocaust” until probably sometime in the 1980s. As I got older, I realized that I had European parents. And then I realized that I had Viennese parents. And then I realized that everyone in my family came from Vienna. Other than the fact that they all came from Vienna and that Vienna was a great European city, I had no clue what this meant.

Sometime, I don’t recall exactly when, I found out that my maternal grandmother never got out of Europe and was killed by the Nazis. I had no idea when she died or where she died; and whenever I had a conversation with my mother about this, the conversation was very short, as my mother would become very emotionally distraught and couldn’t talk about anything.

My mother, Elsa Nichtern, left Vienna in September 1938. She went to England and then, two years later, she came to America. When my mother left Vienna, she took her aunt with her, fully expecting to get her mother, Clara Bader Nichtern, out of Vienna also. That never happened. My mother carried that burden with her, her entire life.

As I was growing up, I got bits and pieces of the story at various times, but never any details of what had happened in Vienna or why the people I knew and met growing up were here in America. And I knew virtually nothing about the family members who didn’t get out.

My mother and father moved to Florida in 1974. In 1996, my father passed away. My mother and I decided it was time to move her from her condo to an independent-living facility. It was during this move that I discovered a leather-bound suitcase that could have been used as a prop on the set of Casablanca. It contained photo albums and various papers relating to my parents and other family members– and a small, tightly wound pack of letters, tied with a pink ribbon, in an old and somewhat yellowish plastic pouch with a zipper on top.

About one year later, during a visit to my mother’s independent-living facility, I sat down with her. We took out the suitcase, pulled out some old photo albums and I finally got her to provide some more details on her mother and other family members, many of whom I never knew or had even heard of.

I didn’t realize it at the time, but my mother, who was 87, was starting to lose her mental faculties. Shortly thereafter, my mother had a stroke and lost her ability to speak. My mother passed away in December 2003. (Photo: 1932: Irv’s mother and grandmother.)

In August of 2010, my wife, Fran, and I took a vacation to Europe, which included stops in Prague, Budapest and Vienna. We got to Vienna late in the afternoon of Sunday, August 8, 2010, and decided to see the Holocaust Memorial at Judenplatz. We noticed a small museum in a corner of the plaza. We entered and looked around. In the museum shop, a woman was sitting behind a counter which had literature about the Viennese Jewish community. I struck up a conversation with the woman and told her that my Viennese grandmother had been killed during the Holocaust and asked her where I could get some more information about victims of the Holocaust. She said we should go to the DOEW (Documentation Centre of Austrian Resistance).

At 9 AM the next day, we were at the DOEW. We were greeted by an elderly woman. We told her we had no appointment and why we came to the DOEW. A few minutes later, we were escorted to an office where we first met Dr. Elisabeth Klamper, the DOEW archivist. After about 15 minutes of searching through the DOEW records, Dr. Klamper raised her head from behind the computer screen. Her face had lost its color. She said, “I have some very bad news to tell you. Your grandmother was killed at Maly Trostinets.” I had no idea what she was talking about, since I had never heard of Maly Trostinets. Dr. Klamper gave us a brief rundown of the Maly Trostinets extermination camp. Since then I have learned a great deal more. I now know more about my grandmother’s life and how she came to live in Leopoldstadt. I now know that my grandmother was murdered in June 1942 at the Maly Trostinets death camp outside of Minsk.

After we met with Dr. Klamper, what originally was planned as a five-day vacation resulted in 2½ days of researching at the Israelische Kultesgemeinde (IKG) and the Archives of the City of Vienna to find out everything I could about my family. 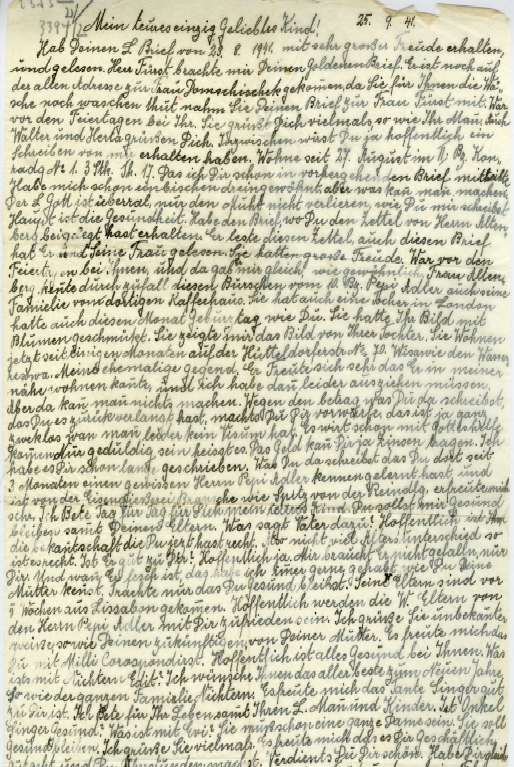 At this point, I didn’t quite know what I had. But I knew enough to realize that the letters could represent a diary of my grandmother’s life under Nazi occupation. I knew that I had to get them translated. After about 1 year trying to find a translator, and as a result of my wife’s involvement with a Fort Wayne Holocaust education group, we met Joy Gieschen, a graduate student at a local university, who agreed to take on the translation project. Joy studied German as an undergraduate student and had recently returned to the USA after spending 1 year in Austria. At the time of our meeting, Joy was pursuing a master’s degree in education, preparing for a career as a German teacher.

Joy became very involved with the letters and asked if she could use the translated letters as the basis for her master’s degree research project. As Joy was discovering information about my grandmother, it started to become clear that possibly the letters could form the basis of a larger research project and even a broader-based Holocaust research publication. With this in mind, we decided to go back to Vienna; back to the DOEW; back to the IKG; and to visit the places where my grandmother lived. So in June 2012, Fran, Joy and I traveled to Vienna. 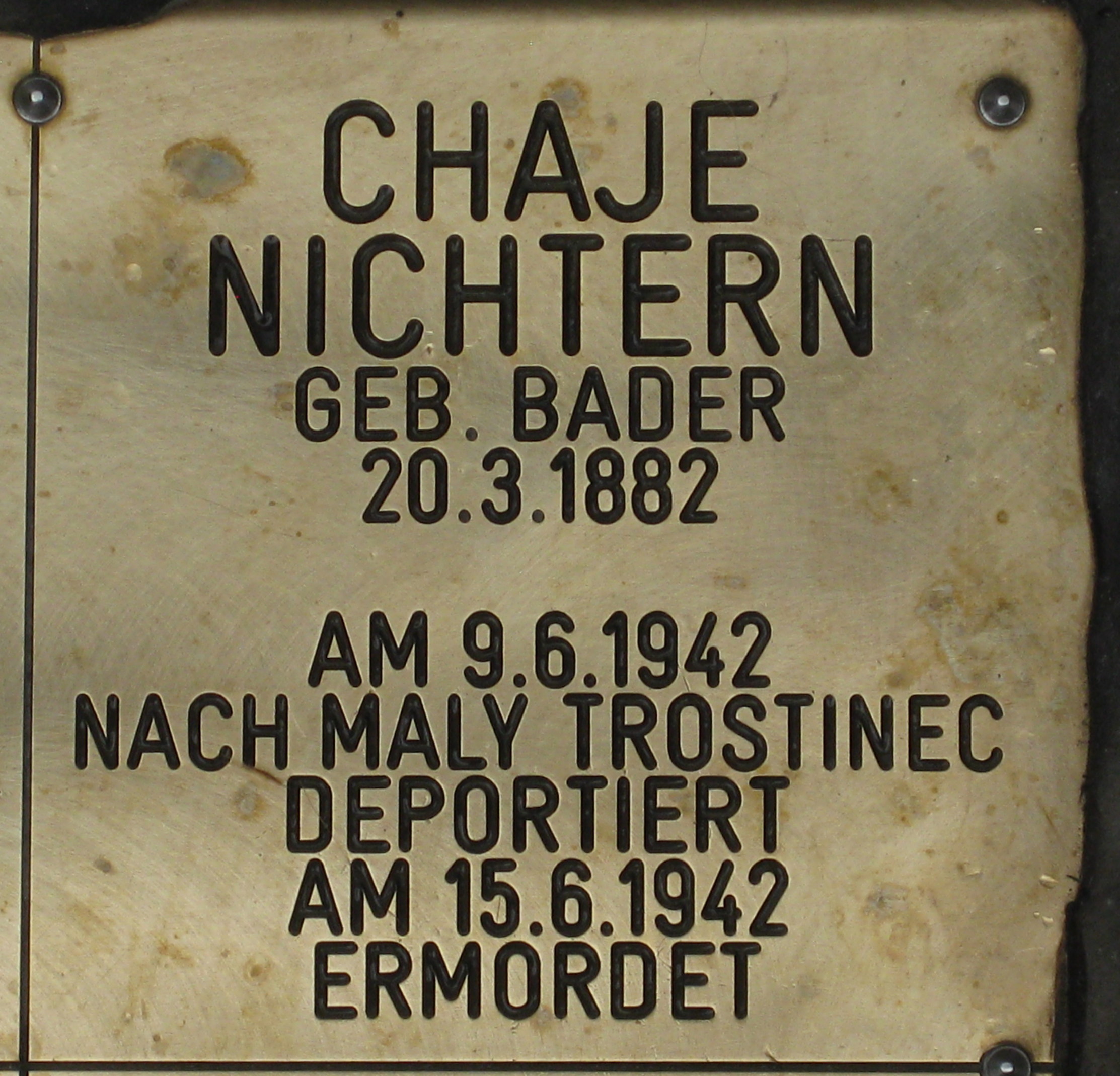 As fate would have it, Joy was actively looking for a job during spring 2012. One of the job possibilities was teaching at an international school in Vienna. Joy made arrangements to go there for a preliminary interview when we were in Vienna. We decided to go with her. As we were leaving the school, we mentioned that our main reason for the Vienna trip was to do research on the “Letters” project. One of

the teachers at the school asked if we knew about the plaques that had been put into the sidewalks of Leopoldstadt. These plaques identified the last known residences of Viennese Holocaust victims and marked a trail through what was the most concentrated Jewish neighborhood in all of Vienna. We knew nothing about these plaques. We then went to Leopoldstadt and started searching for the Der Weg der Erinnerung. We found it and took down the information about Der Weg. I did some internet research on this project and wrote letters to Dr. Elisabeth Ben David-Hindler. Once I found out more details about Der Weg der Erinnerung project, I knew that I had to preserve my grandmother’s memory by dedicating a stone for her.

So here I am today in the neighborhood where my grandmother and many of her family and friends and thousands of other Viennese Jews lived. Some of them we know and some we will never know. Here is where they lived for many years or for just a short time, before their lives were so tragically and terribly destroyed by Nazi persecution.

May all their memories be for a blessing.