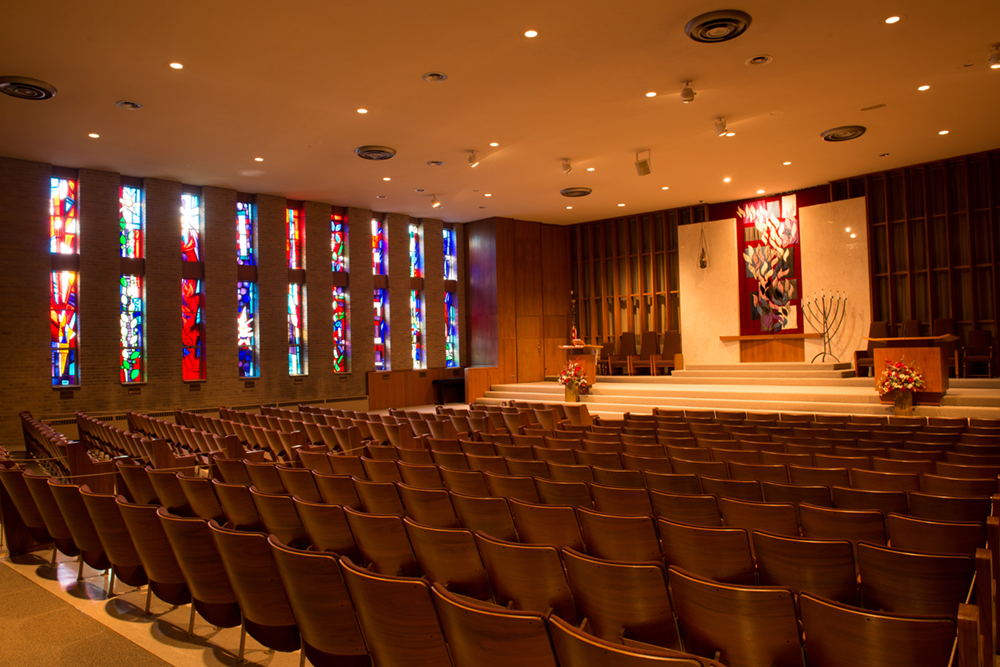 Our congregation has been located on Old Mill Road since 1961. The main worship space is our beautiful Sanctuary, which also serves as a setting for community programs and concerts.

The pulpit (bimah) extends across the entire length of the Sanctuary, with a lectern on the left for sermons and lectures, and an altar on the right side for services and scriptures. The focal point on the pulpit is the Ark, which contains the sacred scrolls of the Torah, the five books of Moses.

The Ark is flanked by two five-and-one-half-foot by 17-foot- high marble pylons. Over one of them hangs suspended the Ner Tamid, the eternal light, which burns continuously day and night as a symbol of God’s everpresence as set forth in the Bible. 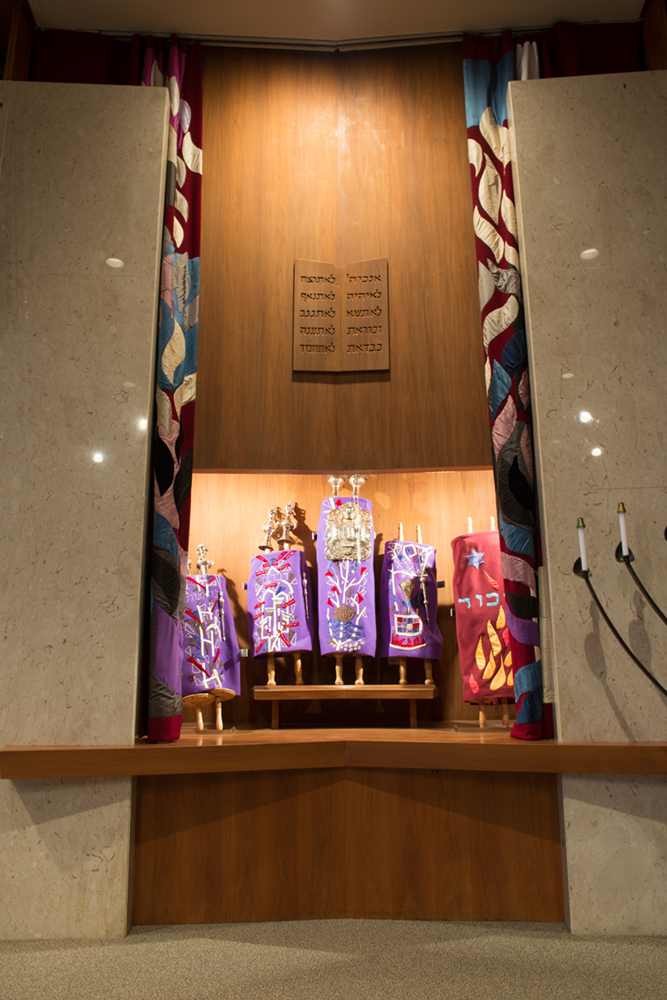 It is the work of world-renowned artist and metal-craftsman Ludwig Wolpert, formerly of the Bezalel School of Art in Jerusalem and the Jewish Museum in New York City. Out of the Ner Tamid’s soft steady light emerge seven tongues of flame in bronze — recalling the first seven days of Creation.

At the foot of the other marble pylon stands the seven-branched candelabrum mentioned in the Bible — the menorah — that is lit during services. Our bronze menorah is the second of two of the same design by Wolpert. The other was exhibited at the International Festival of Art in 1958 and described by Frank Lloyd Wright as “a perfection of form, material and function, blended simply into a perfect whole.” (Wolpert also designed the bronze letters on the Temple’s exterior.)

The Ark is covered by an overhanging wool curtain with silk appliques. The 15-foot-high structure is electrically controlled from the altar, lectern and Ark. The curtain has been designed for the Temple by Samuel Weiner Jr., an American Jewish artist. The colorful background of 12 squares and rectangles represents the banners of the 12 Tribes of ancient Israel. Weiner has depicted the mystic flames of the Burning Bush leaping high into the air to form the four-letter name of God in Hebrew – Yud-Hay-Vov-Hay — “Adonai-Lord.”

Inside the Ark are five Torah scrolls of varying sizes. The texts are the same, but each was written in a different time and came from a different country. The tallest Torah is the oldest, having come from Germany, and had been used prior to 1848. Each Scroll is written in ancient Hebrew by hand on parchment. The most unusual Torah is the Holocaust Torah.

Over the sacred Scrolls are the tablets of the Ten Commandments, with the Hebrew of each commandment carved in wood. The light of the “Ner Tamid” falls softly upon them as a symbol that God makes His will known unto the people of Israel and all humanity through the Ten Commandments that are the spiritual focus of the Torah. 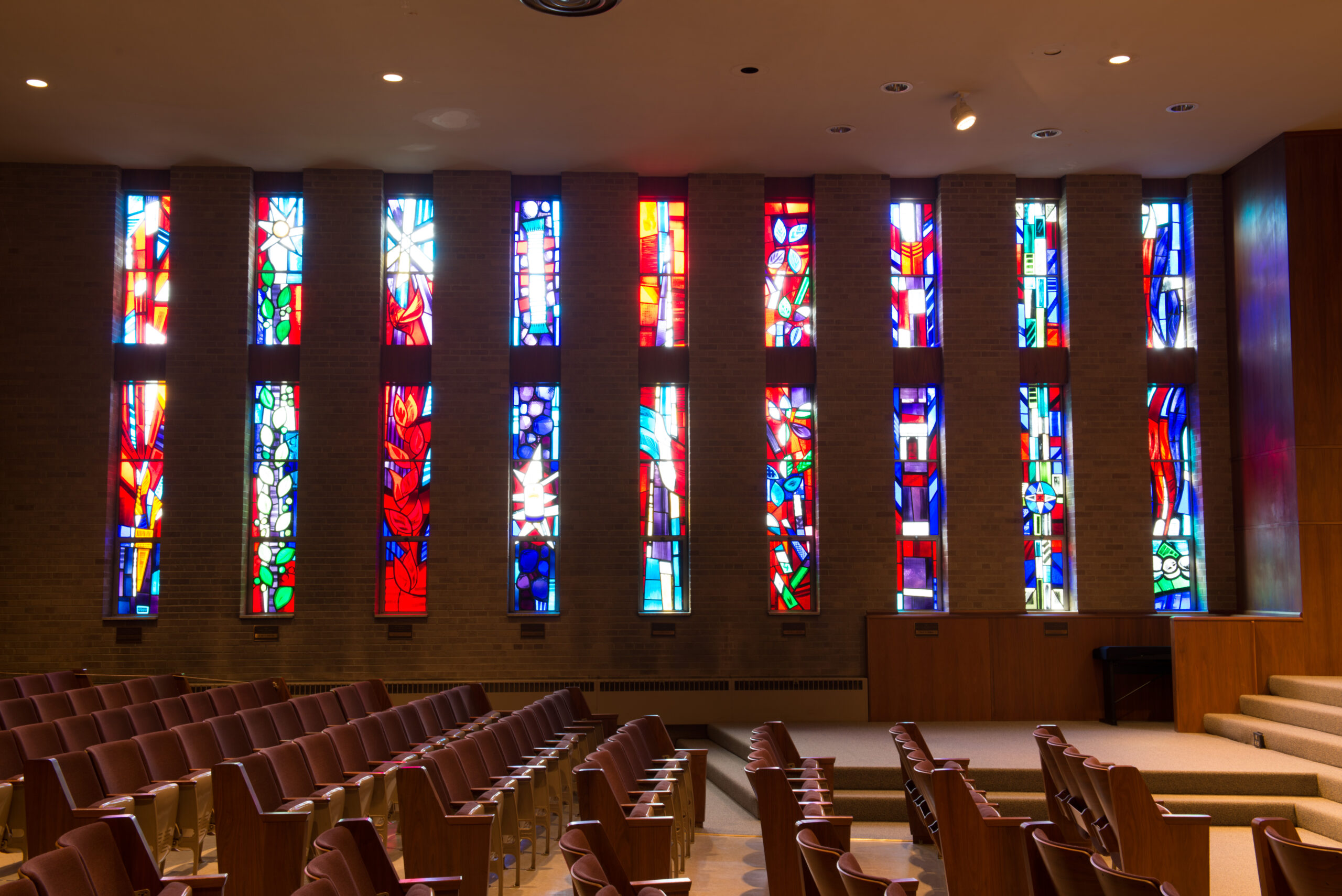 The stained glass windows in the Sanctuary depict the epic of the Jewish People, each representing a period from biblical days to the present. The basic theme was projected by the late Rabbi Frederic Doppelt of this congregation and the creative work of Samuel Wiener Jr. of Columbia University.

The window represents the historical and spiritual experiences of the Jewish people over nearly 2,000 years. In telling of their flight from bondage, symbols show the crossing of the Red Sea, encampment on Mount Sinai, the receiving of the Ten Commandments and the shielding by a cloud by day and being guided by a pillar of fire at night. The Promised Land is indicated by the land of blue and white.

The second window represents the collapse of the Biblical World and the beginning of the Diaspora, directing the destiny of the Jewish people for the next 2,000 years. Dispersion from ancient Judea began with the Babylonian exile and the destruction of the Second Temple by the Romans in the year 70 of the common era. The world of the Diaspora extended to the four corners of the earth, which is depicted by three symbols: A compass in the center of the window pointing north, south, east and west; streams of color and diagonal lines radiating in all directions; four blocks of dark grey stained glass set in the four corners.

The third window with massive blocks of dark purple and somber shades represents the precarious life of the Jewish people in the harsh Roman world. Captives from Judea were pitted against armored gladiators and thrown to wild beasts for sport. The Arch of Titus, which was erected by the Roman Senate to celebrate and commemorate his victory over Judea, is in the center of the window. Also represented is the seven-branched oil lamp of solid gold, which Titus had plundered from the Temple of Jerusalem. The menorah was borne by Judean captives in the triumphal procession of Titus upon his return to Rome. It is engraved in the Arch signifying conquest and destruction of the Jewish people. However, at the very top of the window is the shofar depicting salvation and liberation.

The miraculous revival of the Jewish people is shown in this window. When the Roman Empire fell, large numbers of Jews found haven in Spain. As the colors indicate, this was a bright and brilliant period in Jewish history. For hundreds of years, especially in the halcyon days of Islamic culture, the Jewish people enjoyed a large measure of liberty and prosperity. This was a time of the flowering of genius and talent. Some of the greatest of Jewish philosophers, scientists, physicians, scholars, writers and poets lived. This list includes Maimonides, Jehuda Halevi and Solomon Ibn Gabriol. The dark designs on the window predict the dark days to come, leading to the Spanish Inquisition and the Expulsion of the Jews from Spain in 1492.

The world of Western Europe in the fifth window becomes the center of Jewish life and thought. In Holland, England, France and Germany, Jewish communities and cultural institutions achieved some measure of social emancipation. However, the solid column of purple symbolizes persistent discrimination and persecution. Striving against it is a shaft of light, a symbol of the light of reason which began to penetrate into some areas of Western Europe with the rise of the modern epoch in history. Modern philosophy and science clash with medieval bigotry and superstition. There is a cry of “Liberty, Equality, Fraternity,” lifting the hearts and hopes of all downtrodden and disinherited. The tri-color of blue, white and red sweeping across the center of the window speaks of triumph of enlightenment, toleration and freedom. This gave rise to Reform Judaism in the Western European world.

This window sadly reminds us that during this period the Jews in Eastern Europe continued to endure the dreary darkness of the Middle Ages. In Russia, Poland, Romania and Lithuania, grim ghetto walls still stifled the life of millions. The Jews lived in daily threat of mob attacks and pogroms. The rocks and stones of deep colors jut out of the ghetto into the very soul of the toiling humanity confined behind them. The two streams of blue and white – symbolizing the light and strength that sustained the Jewish people in the ghetto world – represent the traditional prayer shawl and scroll of the Torah. The devotion to God in daily prayer and meditation and the passion for learning was perpetuated through education of Jewish children. The brilliance of the Baal Shem Tov, Chayim Nachman Bialik and Sholem Aleichem all were produced behind the forbidding walls.

7. Memorial to the Six Million

The stark red, blazing fires reflect the unspeakable horror and tragedy of the Holocaust. Notice the angry tongues of flame smudged with puffs of black smoke contrasting with the gentle flames of the Burning Bush climbing high up the curtain over our Holy Ark, both done by the same artist. The heavy panes of blue, laced with strips of black, symbolize the bars of the concentration camps. But the millions died with the hope that the people of Israel would survive, depicted by the Star of David with sunlight rays streaming from above. The two yellow streaks remind us that the oppressors made the Jews wear this star as a badge of shame, but to the martyred it was a star of glory and salvation. The window is dedicated with loving reference and the hallowed Kaddish: Yitgadel V’yitkadash Sh’meh Rabbo…

8. The State of Israel

The eighth window recounts the hope of the emergence of the State of Israel. The thick track of deep purple running through the center symbolizes the suffering and struggles in the rebirth of the state. Out of it grows olive leaves and citrus fruit, symbols of the peace and agricultural plentitude. Pushing upward to the sunlight is the white and blue of the Israeli flag. Here there is promise for the future and life-giving rays that can bring health and hope to other nations.

The final window tells the exciting story of red, white and blue — the American story that has changed and advanced the course of the Jewish people. This nation opened up new frontiers for all peoples — the hunted and the hungry, the persecuted and the disinherited, the dreamers and builders of higher humanity. The torch is sunk in dark purple because freedom and opportunities emerged only after suffering and sacrifice. Even now prejudices still exist, represented by somber blocks with black strips across them. The flames of red, white and blue still are certain and steady, pushing against the walls of the window to shed their light into the life of men and women everywhere. More than five million Jewish people share their Americanism with those of other religions and philosophies.