Bruce Colegrove’s passion for language couldn’t be missed when he read Torah on Yom Kippur morning at the Temple. His enthusiasm for finding deeper meaning was clear as he translated the passage from Deuteronomy directly from the sacred scroll. At one point during the reading, a visitor turned around in his seat to tell a board member: “This guy is amazing!”

A Hebrew teacher in our Religious School and a b’nei mitzvah tutor for most of the past 14 years, Bruce began preparing for his aliyah several weeks ahead of time after accepting Rabbi Cattapan’s invitation for the Day of Atonement. Bruce said he read through the passage, consulted a grammar book and materials in his collection, and reviewed the Hebrew to make sure he knew the meaning of all the words.

“For me, knowing what it means is crucial,” said Bruce, a native of Elmira, New York. “When I prepare kids for their bar or bat mitzvahs, I want them to know what the passage means. As a language teacher, that’s number one.”

In addition to working with students at the Temple, Bruce teaches Spanish at Canterbury High School. He studied Spanish as a kid and learned German while serving overseas in the U.S. Army, adding Ancient Greek upon his return. His subsequent language studies included Sanskrit, Latin, French, Old Irish, Old Icelandic, Hittite, Lithuanian, and “a little Persian.” He said he dabbled in Italian and Dutch, and taught himself Hebrew.

With a bachelor’s degree in Classics from Elmira College, Bruce completed most of the work toward a PhD at Cornell University in Classics with a concentration in Historical Linguistics and Indo-European Languages. Drawing on his knowledge of the spoken and written word, Bruce notes that “verbs in Hebrew are challenging, but they are nothing compared to Old Irish or Ancient Greek.”

Bruce, 61, has two children. His daughter, Rachel, 21, is a junior at Indiana University who currently is studying in Lima, Peru. His son, Jack, 15, is in 9th grade at Canterbury High School. 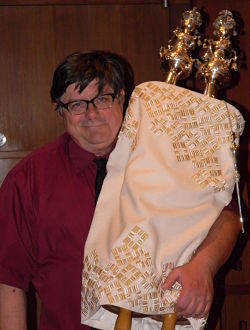 A Jew by choice, Bruce said he’s always enjoyed studying Torah and found it inspiring because “it’s the world’s wisest poetry.” He said it’s particularly meaningful to study the text directly rather than a translation because the nuances are so important. The discussion prompts him to explain particular illusions that appear in the passage and why he needed to clarify the meaning of a verb. He also patiently explains lexical themes and poetic figures of speech such as anaphora (repetition of a word or phrase) that help to fully appreciate and comprehend the portion.

By his estimates, his Yom Kippur morning 5775 reading is the fourth time he’s had the honor of reading Torah on the High Holy Days at Achduth Vesholom. Bruce praised Rabbi Cattapan’s “genuine love of Torah” and wishes more people would embrace the challenge of reading Torah.

“When I’m standing there, my prayer is ‘Adonai, use me to speak to the people,’” he said. “Ultimately, we’re only as good as Adonai lets us be. All the wisdom and good comes from Adonai. This is Jewish tradition. Only when we cling to the Tree of Life can we impart it. I try to explain to the kids that we have no comprehension of Divine Nature – that it’s beyond the abilities of the human mind to understand.”

« Celebrating Leonard and Rikki Goldstein » Matthew Katinsky: Reaching Out To Care For Congregants