Welcome To The Rifkin Campus at 5200

Located at 5200 Old Mill Road, the Rifkin Campus grew out of Congregation Achduth Vesholom’s re-envisioning of its beautiful building and grounds as a Jewish community center. Our goal is to be a resource and space for the whole community to bring people together, whether for worship, educational, artistic, cultural, or recreational programs, and to promote greater understanding among all faiths. 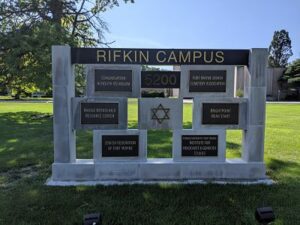 Created from stone and bronze, the sign for the Rifkin Campus was designed by Sculptor Cary Shafer. He describes the sign this way: “Limestone panels and columns mimic the Temple’s limestone facade. Negative spaces are integral to the design, separating each tenant plaque, allowing the eye to move from cube to cube, space to space, with ever-changing background scenes.” The structure consists of 8,000 pounds of Indiana Limestone, cold rolled steel, and bronze panels, each element fabricated using local resources.

At the dedication of the Rifkin Campus sign, Danny Rifkin said, “Our family has been in Fort Wayne almost 75 years and this is our home. As grandchildren of European immigrants who came to America in search of true freedom, the preservation of Judaism here is important to us. It not only represents our own heritage, but reminds us of how lucky we are to live in a country in which all people are free to choose their religious path.”

He continued: “We’re proud to support the establishment of a Jewish cultural center that is part of the larger community, and believe that the vision of a place that brings diverse people together for worship, education, and the open exchange of ideas will promote the broader interests of the community.”

Madge Rothschild was the great-granddaughter of Sigmund Redelsheimer, a founding member of Achduth Vesholom. At the time of her death in March 2005, she was the last Temple member to be a direct descendant of a founding family, a link that lasted 157 years.

Attorney Robert A. Wagner, a member of the Distribution Committee for the Madge Rothschild Foundation, noted the family legacy in saying that Achduth Vesholom was Madge Rothschild’s home and that she was the fourth generation of her family to participate in congregational life.

“She would be very proud of the fact that the congregation has continued to advance not only in regard to its structure here, but also its programs and the gathering of the many Jewish interests and needs in our community,” he said, adding that he views the Resource Center as “another chapter in the successful and contributing life of this congregation to our community.”

The Temple has been nestled in the Woodhurst neighborhood since 1961. Earlier phases of the Rifkin Campus at 5200 project included a new circular driveway, improved parking, new office space, and updated and new handicap-accessible bathroom facilities, a new Religious School office and space for the Jewish community’s Thoughtful Thursdays program. 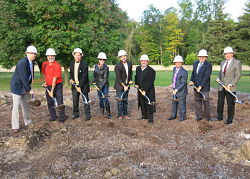 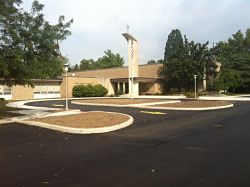 The Rifkin Campus at 5200 project grew out of a strategic plan adopted by the congregation in 2012. Since that time, changes include: