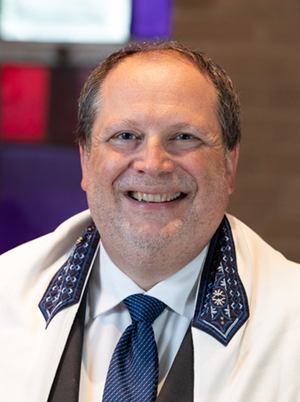 Rabbi Meir Bargeron joined Congregation Achduth Vesholom on July 1, 2020 as the Temple’s 24th spiritual leader. He was ordained at Hebrew Union College – Jewish Institute of Religion in Los Angeles in May 2020 and enters the rabbinate after a career in clinical social work and nonprofit management in the health care sector.

A native of Petoskey, Michigan, Rabbi Bargeron graduated from Michigan State University with a bachelor’s degree in English Education. He began his working years in Silicon Valley and quickly learned how much he enjoyed working with people. This led him to complete a Master of Social Work degree at the University of St. Thomas and St. Catherine University in St. Paul, MN.

Rabbi Bargeron served the community as a leader in two nonprofit organizations in the health care sector before working as a clinical social worker. Meanwhile, he was an active member at Congregation Shir Tikvah in Minneapolis, where he was a lay prayer leader and served on the board of trustees before deciding to become a rabbi.

During his rabbinical education, Rabbi Bargeron served as a chaplaincy intern at a nursing home in Jerusalem and also at Cedars-Sinai Medical Center in Los Angeles, a student rabbi at Congregation B’nai David in Visalia, CA and a rabbinic intern at Congregation Or Ami in Calabasas, CA. Rabbi Bargeron also led High Holy Day services for two years for the Jewish community in Port Angeles, WA.

At Or Ami, Rabbi Bargeron taught in the religious school and led a program to engage teens in social action. He also provided guidance to a lay-led social justice team and to a group of older congregants as they built a village community within the congregation. Rabbi Bargeron coordinated communications and provided pastoral support as the congregation responded to the needs of those who were displaced or lost their homes in a series of wildfires. He continued this work to support congregational connection during the current public health crisis.

Rabbi Bargeron’s rabbinic thesis is titled “I Will Be What I Will Be: Biblical Texts for Those Who Are Becoming Jews,” and provides pastoral commentaries to support those who are in the process of converting to Judaism.

Rabbi Bargeron is married to Jon Tam, an engineer and college instructor.

Rabbi Emeritus Richard B. Safran was raised in New York, where he majored in Intellectual History at Brooklyn College. After working as a chaplain’s assistant in the Air Force, he was ordained at Hebrew Union College – Jewish Institute of Religion in New York.

He served a Reform congregation in Steubenville, Ohio, before coming to Fort Wayne in 1969. He became our Rabbi Emeritus in 1995.