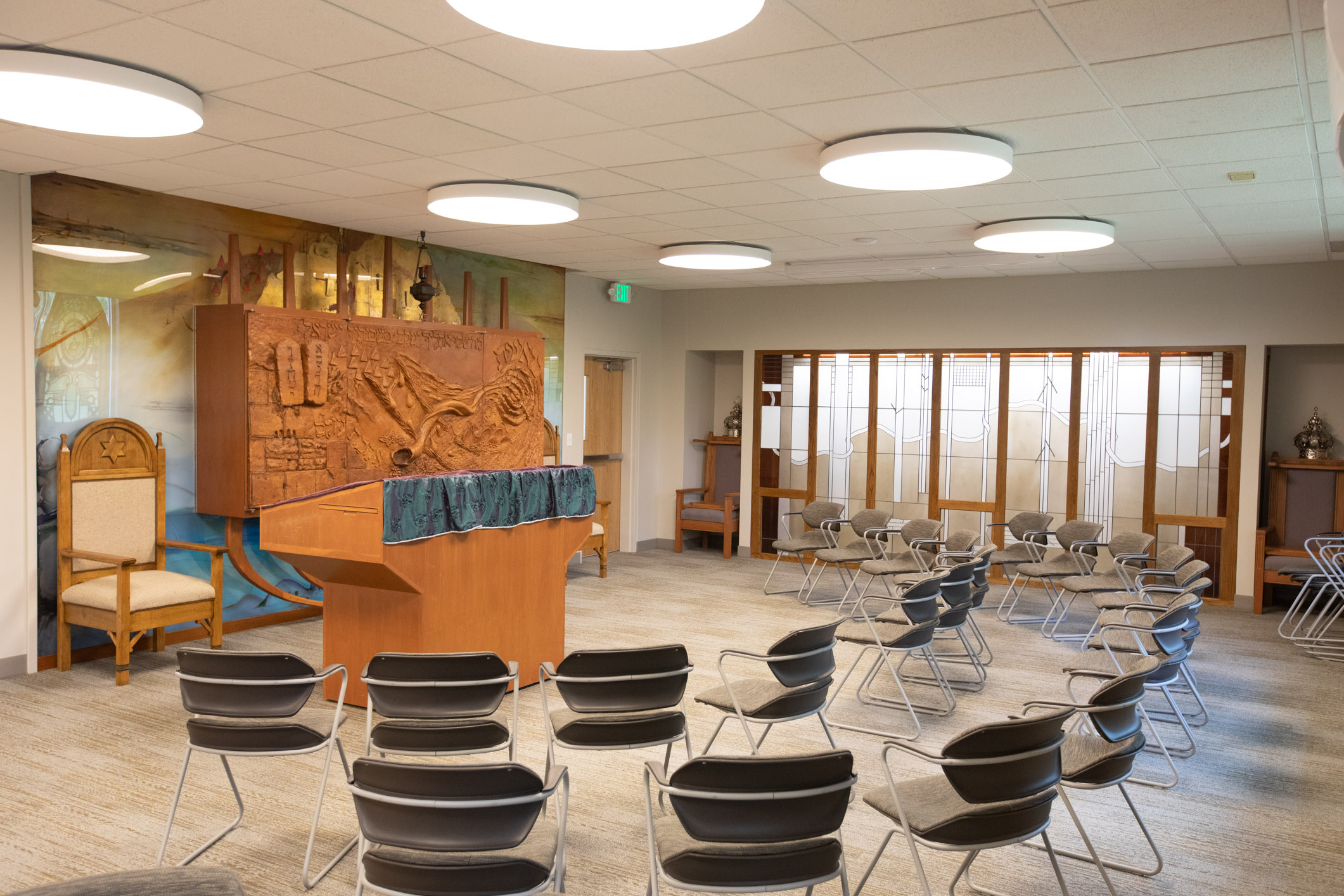 The Goldstine-B’nai Jacob Chapel is a beautiful worship space and meeting area that brings together the history of Congregation Achduth Vesholom and Congregation B’nai Jacob. It is used most Saturday mornings for our Shabbat service.

Remodeling of the Temple’s Goldstine Chapel began in fall 2019, soon after the two synagogues came together as one congregation with two traditions.

Work was completed in early 2020, though the pandemic delayed the formal dedication and regular use of the space until fall 2021. The chapel was formally dedicated on December 3, 2021. 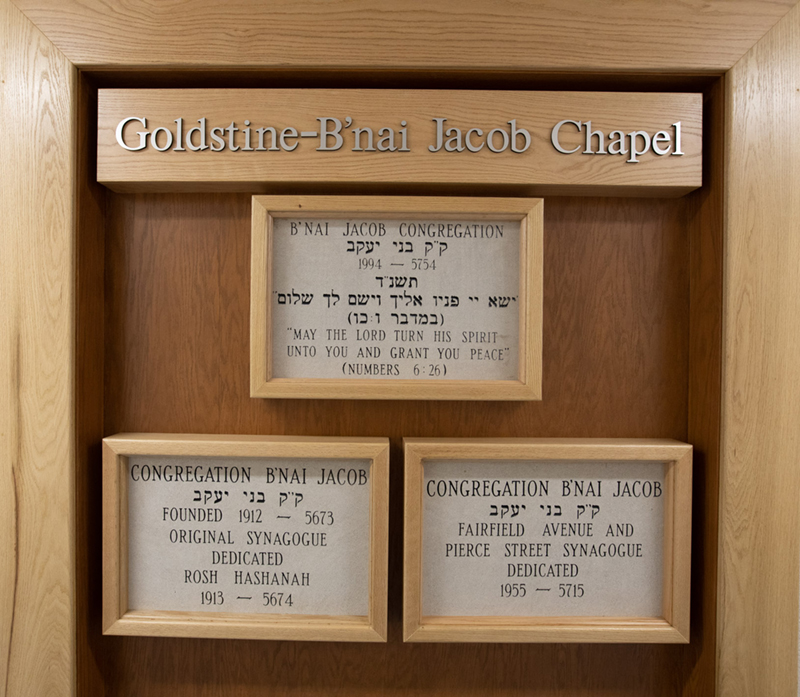 Cornerstones from previous B’nai Jacob buildings are located in the hallway near the chapel.

The ark and several stained glass pieces came from the former B’nai Jacob building at 7227 Bittersweet Moors Drive, which was dedicated on October 29-31, 1993. 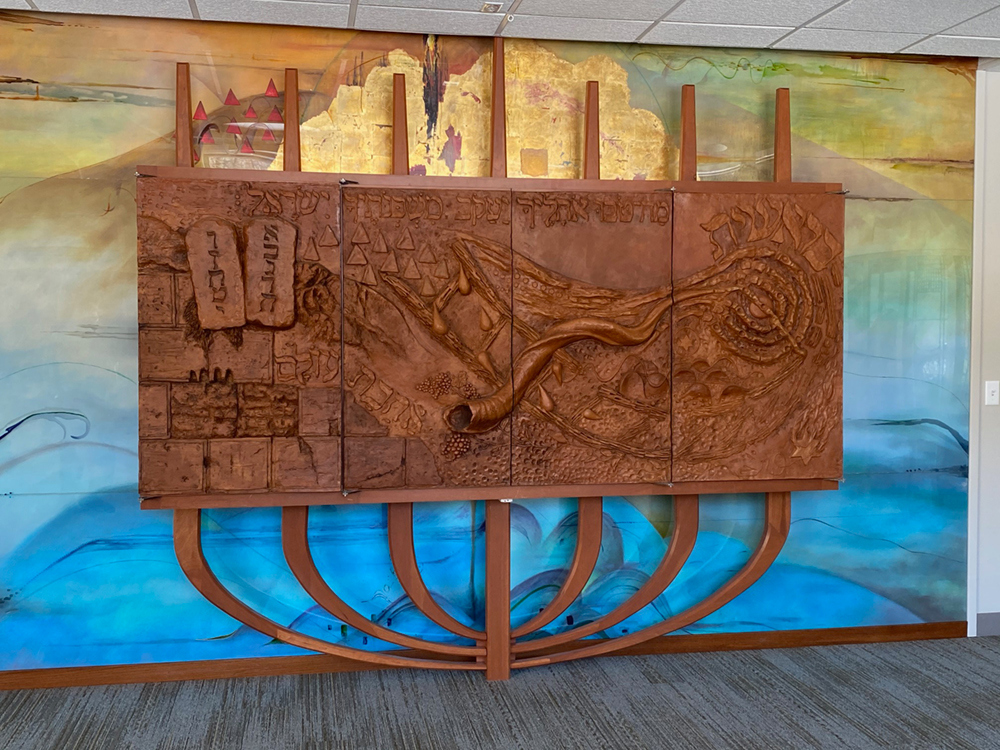 The Ark and Mural

Lee Bleifeld (1926-2019), a nationally known artist and former member of B’nai Jacob, built the Ark. It was commissioned by Melvin Krel and Marvin Crell, sons of Hannah & Simon Crell, all of whom were Holocaust survivors.

As described by the artist:

The Ark relies on symbols from our history to tell the story on the four doors that are the front of the Ark, seemingly held up by a menorah and framed by a mural of Jerusalem.

Each of the doors tells a part of the story that blends into the next, a dependence that depicts the Jews’ reliance on other Jews. Every Jew is a part of the whole people.

Because Hebrew is read from right to left, the design starts on the right, and at the beginning with Bereshit (“In the Beginning” in Hebrew). The menorah, patterned after the one taken from The Temple by the Romans, is circular to indicate perfection. Light shines from the menorah, separating the dark smoothness of the sky and shows how God separated the dark by the light from the earth. The earth is indicated by many circles with dots in the center, which reflect perfection of the firmament.

The Shield of David, worn by Jews during the Holocaust, is in flames that join the light of the menorah, going up to God. The shield is wrapped with barbed wire and, as it uncoils across the four doors, it becomes a vine and then a grapevine with a lush growth of grapes growing larger and larger, indicating Israel, its growth and prosperity. The story is told that Joshua’s spies came back with grapes, which shoed Israel’s fertility.

Light rays surround the menorah, separating dark from light, ignorance from knowledge, reaching out and becoming Jacob’s ladder. Reaching up from the ladder are 12 tents of the tribes of Israel. Up and down the ladder are the angels depicted by teardrops, some facing up and some facing down, representing happiness and sorry or joy and sadness.

The centerpiece of the Ark is the shofar, a ram’s horn that has served numerous important roles in Jewish history. The horn has been used to communicate and call their flocks, as a trumpet in times of war as in Jericho until the walls tumbled down. In addition, the shofar has announced major holidays, calling people to worship as part of the High Holidays, and is the last sound of Yom Kippur, the holiest day.

On the last door, door number 4, are the two tablets from Mount Sinai and a depiction of the Western Wall, the place in Israel most holy to Jews. It has moss growing from the stones, showing its antiquity. Also on the stones is a handprint proving the many fingers over the thousands of years that men have leaned against the wall to pray.

Complementing the Ark is the mural, a scene of Israel and Jerusalem, the City of Gold. The earth tone colors toward the top represent the desert changing into the blue of the fertile Mediterranean Sea. In the middle in gold leaf is Jerusalem. Smoke and fire in a column are coming out of the center of Jerusalem, recalling when Moses was guided by God as he led the Israelites out of Egypt and goes up to another representation of the 12 tribes, providing both physical and spiritual connections. The City of Gold is enveloped by a circle done in blue, like the blue and white flag of Israel. The circle indicates God’s protection and Jerusalem is Israel’s for eternity.

A menorah appears to be the structural support of the Ark, its light holding up the law. The light of the menorah is an essential meaning of the Ark. In its way, given the mural, the menorah can also represent light to the Jews in the Diaspora.

According to Congregation B’nai Jacob: 100-Year Diary, the artist felt the entire work is a shofar itself, a call to the congregation to come to pray.

At first, the Ark was to have been a vertical structure, with one big door. However, that would have meant stacking the Torahs. Therefore, he went to a horizontal design and quickly realized that one door would be impractical because it must hold the congregation’s nine Torahs.

The Ark is made of Indiana cherry wood. He used 400 pounds of clay for the sculpture of the doors and the molds. Working with a laboratory in New York, he was able to develop a terra cotta polyurethane stain that matched the cherry.

Just as challenging was a 12-foot-high by 16-foot-wide mural, which he had to paint in sections because hhis studio was too small. To get the e-D effect, he used three panes of plastic, one on top of the other, and painted a different scene on each one, making for the final appearance of depth. The Ark is 45 inches high and 10 feet, 6 inches wide. 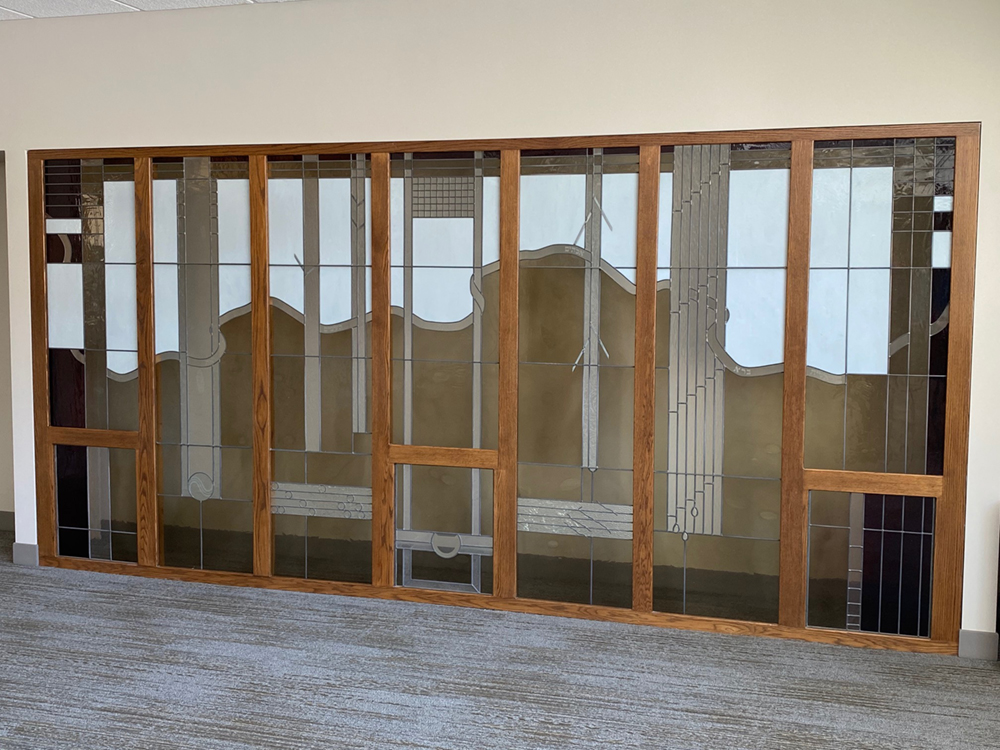 Stained Glass Wall
Aniko Fenyes Droegmeyer is an artist who works with glass and metal. In memory of her parents, Alice & Gabor Fenyes, who survived the Holocaust, she created seven panels of stained glass showing the Seven Days of Creation. Built from right to left and displayed with backlighting, the glass was first in the library of the B’nai Jacob building on Fairfield and later in the back of the Sanctuary in the Bittersweet Moors location. 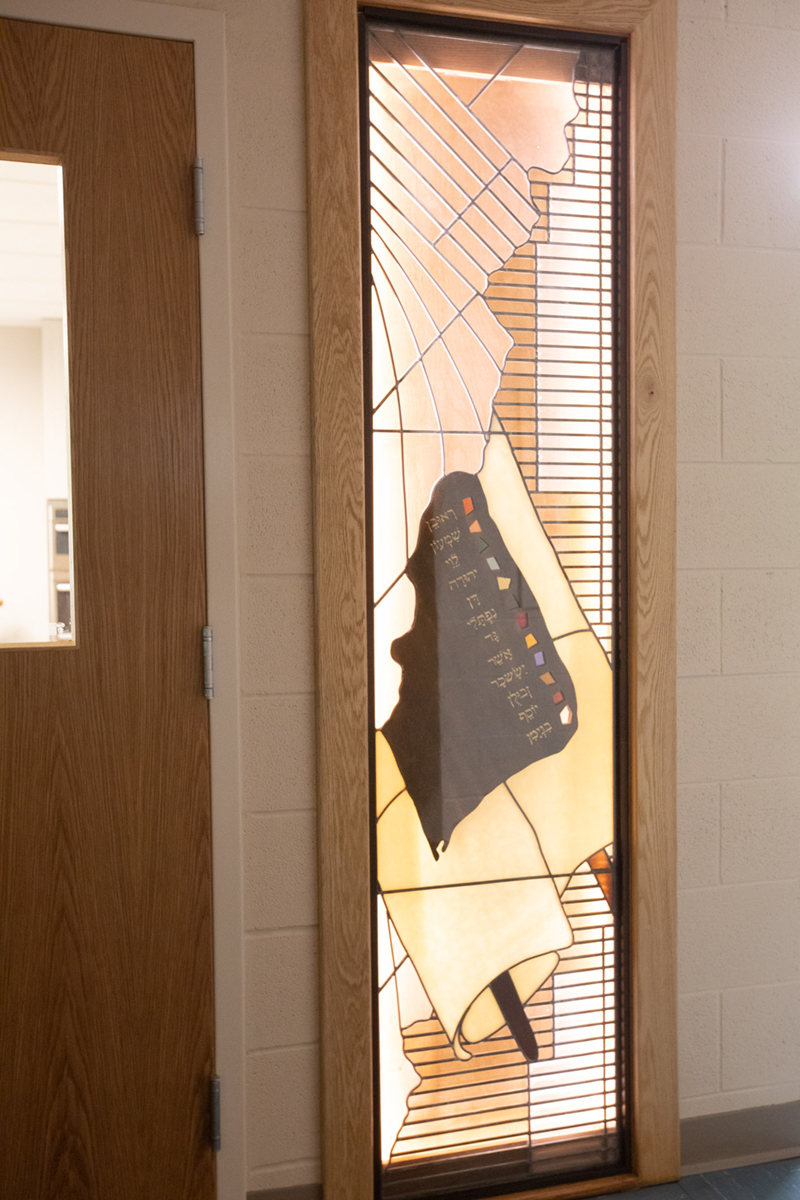 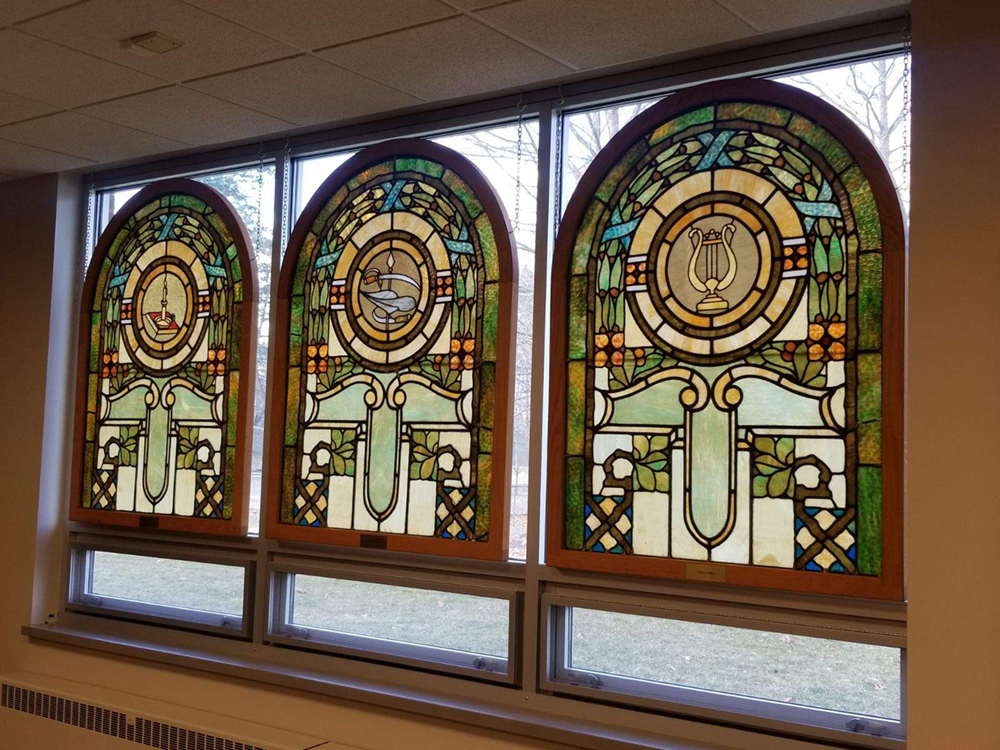 In 1916, Congregation Achduth Vesholom built a new home at the corner of Wayne and Fairfield, immediately south of Plymouth Congregational Church and cater-cornered from Trinity English Lutheran Church.

The sanctuary had beautiful stained-glass windows on both sides and in the back. That synagogue served us for 45 years.

Before they did, however, they offered us the opportunity to take anything from the old building that we might want. We removed as many of the windows from the sanctuary as possible and City Glass was able to restore many of those. Of the eight largest windows, six now hang in the Goldstine-B’nai Jacob Chapel.

Many smaller pieces plus two smaller windows which could not be made whole again were framed into pieces that could be displayed anywhere. And then we had a fundraiser in which these pieces were sold to congregation members.

Roz Weinraub bought one of the two smaller windows and presented it back to the Temple in honor of her late husband, Dr. I.I. Weinraub, a former president. The other smaller window was purchased by Madge Rothschild, a congregant who could trace her family back to one our founders in 1848.

Upon her death in 2005, that window was presented to Visiting Nurse by one of the Madge Rothschild Foundation trustees and it hung in their front window until December 2018. However, through conversations with Robert Wagner, trustee for the Madge Rothschild Foundation, and then with Visiting Nurse’s Board Chair Joe Byers, Vice Chair Patti Hays and CEO Leslie Friedel, we introduced them to the long history of the window.